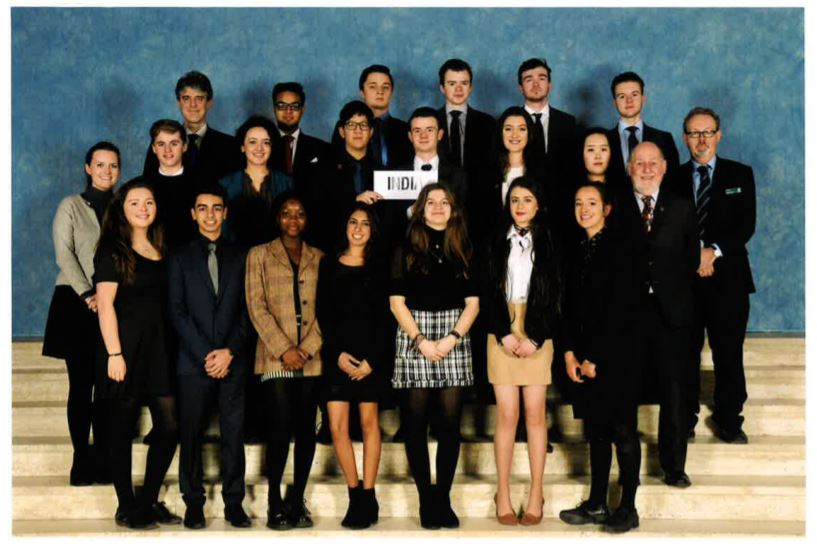 As the mass drummers and horn players left the World Forum theatre Royal Russell students could start to look back on another very successful THIMUN conference. Peter continued to play a large role as a journalist in the media team and ended up writing four full page articles during the week. Georgia and Aisha were both excellent chairs, Georgia in total control of her committees at all times and Aisha – good-humoured, consistent, clear and fair. Georgia had the privilege of addressing the conference at the closing ceremonies. Of the delegates two of the more successful were Stevie and Lucas who did very well in ECOSOC together. Stevie as the main submitter on her resolution (which passed) and Lucas as second speaker on his resolution which also passed. Everyone spoke in their committee and the most improved delegate was Jade who grew in confidence during the week and spoke in her large committee every day. Otherwise Pippa spoke many times and was unlucky her resolution was never debated, Josh worked really hard and finally got his resolution debated on the last day (and passed) and Skanda made his mark on his committee presenting a rightfully partisan resolution on the first day which failed with flying colours.

It was a long week especially with the new system of no plenaries but everyone stuck to their task and were still putting up their placards on the last afternoon.

Outside of the conference the students on Wednesday afternoon either visited Humanities House where they were treated as a refugee, or went to watch a case at the ICC where a Lord’s Resistance Army general was being prosecuted.

Peter in the press room.jpg