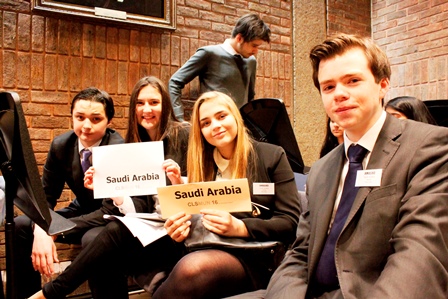 Fourteen pupils descended on City of London School for their annual model UN conference on Saturday.  After a short period of lobbying, the opening ceremonies commenced, including a very interesting key note speech, given by Gadi Zohar, the former military service head of civil administration in Gaza, and a member of the Israeli negotiation contingent with the Palestinians, which resulted in the Oslo Accord in 1995.

The quality of debate was high.  The experience and technical knowledge of the Royal Russell students was clearly apparent.  Josh acquitted himself superbly as the UK ambassador in the Security Council.  Skanda and Nikolai provided some of the most animated debating I have seen for some time, and the day finished with Aisha Dosanjh receiving an Outstanding Delegate award – one of only five such awards given to over 200 delegates.

Well done to all on another outstanding overall performance by Royal Russell pupils, confirming their place at the top table of schools participating in MUN.