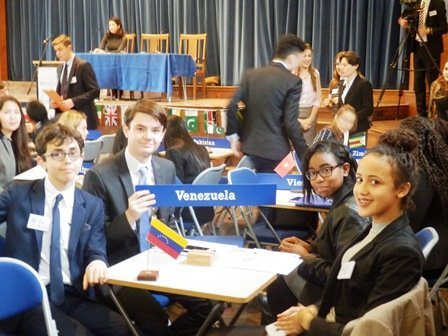 26 Royal Russell students attended the one day Benenden MUN conference, 15 as delegates and 11 as part of the RRS Media team. As always this was a very well run conference which provided a high standard of debate. With conferences at Croydon High and Athens coming up soon we took a relatively inexperienced delegate team to the conference and they did amazingly well. All the students made policy statements and spoke at least one other time in their committee. Scott, Rolanda, Josh and Stevie all had amendments debated and Megan spoke in GA. With the Royal Russell placards and flags being used in the General Assembly and the RRS MUN Media team filming the conference all our delegates felt at home and made the most of a great day of debating.

Copies of the films made by the RRS Media team are available here.

Miss Green being interviewed at Benenden for Films.jpg

Robbie being interviewed by Media.jpg

Rolanda waiting for answer in SC.jpg