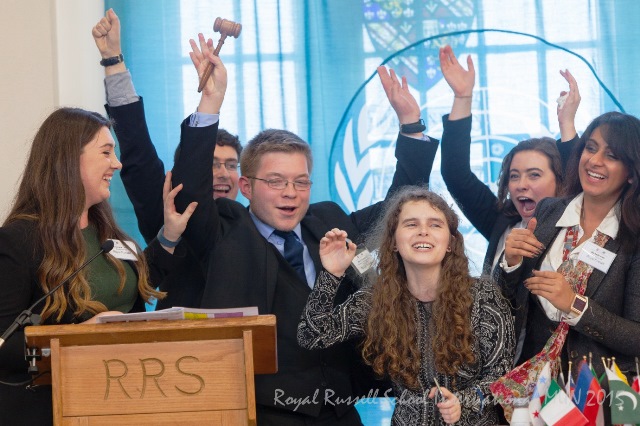 Please do look at the MUNTV coverage of the conference here and the ICJ judgment here.

On Saturday 17th October over 600 delegates from 15 countries (including the U.S.A, Turkey, Japan, Czech Republic, Greece, Portugal, Norway, Egypt and France) arrived to participate in the 34th annual International Model United Nations Conference. Over the 4 days, pupils had an intense programme of debating, journalism, filming and editing, security and administration. This year’s conference has also been the 10 year anniversary of MUNTV, which has evolved into a huge addition to the experience of all those attending. Once again we hosted a tremendously successful International Court of Justice, led by Mr Stern. This year’s case was The Marshall Islands v. United Kingdom, and the verdict was delivered by the President of the ICJ on Tuesday morning, following their four hour deliberations. This year also saw the introduction of a new committee, the Special Committee on Globalisation, topics for discussion included HIV / AIDS and tobacco based industries. Secretary General Bart Konechni oversaw the smooth running of the conference, with the assistance of his Presidents of General Assembly, Presidents of Security Council, Committee Chairs, Heads of Secretariat, Heads of Media / Events and Heads of Press. The students, although exhausted by the end of the day on Tuesday, enjoyed hosting a very successful conference; a conference of students, run by students, for students.

The delegation Awards for the 2015 conference went to the following schools representing the listed countries. Well done to you all, and we look forward to seeing you again next year.