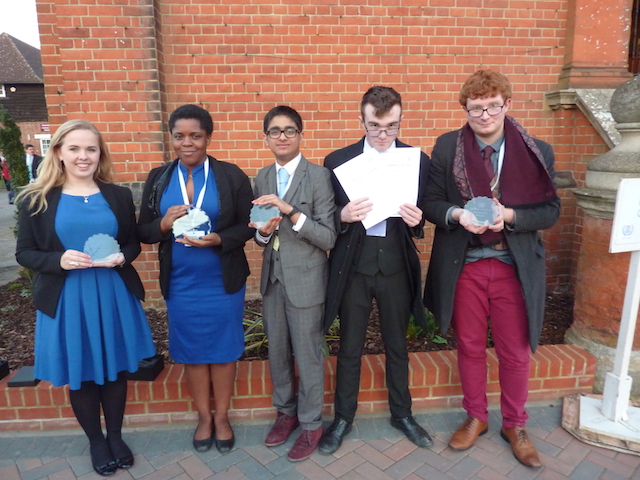 A large team, some young and enthusiastic and some, by now, extremely experienced old hands, arrived at Haileybury school representing China, Syria, Brazil and Trinidad and Tobago.

Some started boldly and a few nervously but all had a successful first day. Sam quickly got his resolution signed, approved and debated in committee where it was passed unanimously. Marianne made a convincing and passionate policy statement and Badshah dominated his committee as China. Michelle and Bart were two of a small number of guest chairs and provided voices of reason and ensured smooth running in their respective committees.

Debating in committees continued into the second day and, in the afternoon, delegates congregated together in the General Assembly. Charlotte did excellently to have the resolution she co-authored passed in General Assembly.

Despite the enormous competition from some 700 other delegates, Royal Russell pupils shone, with the top award of distinguished delegate being awarded to three of our delegates – Sam, Charlotte and Badshah, with Henry picking up an award for highly commended delegate. The China delegation (Sam, Badshah, Charlotte, Henry and Rita) was awarded one of the three prestigious distinguished delegation awards to crown another hugely successful MUN conference for our pupils. Well done to one and all.