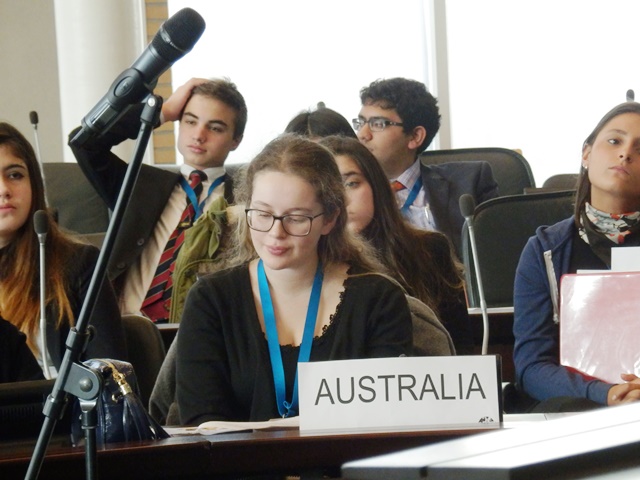 Royal Russell students have returned from another successful trip to THIMUN this year with 16 students representing Australia. Many of the students co-submitted resolutions and all asked questions or took the floor in their committees. Sam successfully main submitted a resolution through his committee and then took it successfully through the Human Rights Commission. Georgia and Ella also had real success in the Security Council.
Outside the Australia delegation we had 7 other students attending THIMUN 2015. Throughout the conference Michelle worked hard as one of the Deputy Sec Gens and both Bart and Georgia chaired their committees fairly and with authority. Will and Diana worked on Mutiny this year and Diana produced a number of great water colours for the THIMUN newspaper whilst Will excelled as one of the Layout editors. Badshah spent the week in the Advisory Panel on the Gulf of Guinea and Maria proved herself an exceptional Judge in the ICJ.
As well as attending the conference many of the students visited the Rijksmuseum in Amsterdam and either the Escher museum in The Hague or the International Criminal Court. A number also saw Ratko Mladvic at the ICTFY.

Ella at the centre of lobbying.jpg

Georgia a delegate in the OPCW.jpg

Badshah in the Advisory Panel.JPG

Dan Callum Sam at the ICJ.JPG