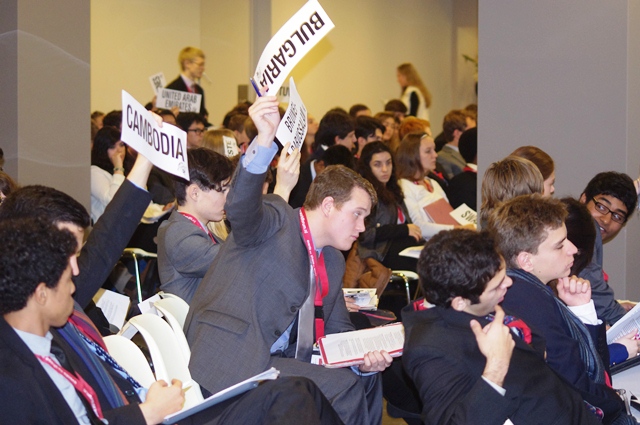 16 Royal Russell students representing Bulgaria attended the annual Hague Model United Nations conference. The conference is the largest in Europe with 3,500 delegates from over 200 schools worldwide. Our students were very active at the conference and all of them spoke a number of times in their committees. Tighearnán as Ambassador made an impassioned speech in the General Assembly whilst Sultan, Jack and Tola all spoke well during opening speeches in their commissions. Barty and Tighearnán both acted as main submitters on resolutions which passed in their committees and David and Sultan were both yielded to as main co-submittors on their resolutions. As well as attending the conference students also found time to visit Ann Frank’s house, the ICJ visitor centre, and the Escher museum. Many of the students also visited the ICTY seeing Radovan Karadvic defending himself and Martin Bell, father of an old Russellian, acting as a witness in the Ratko Mladic case.

Jack and David in ECOSOC.JPG

Students at the Peace Palace.JPG